According to the Ministry of Natural Resources and Environment, Phetchaburi estimated waste was 521tpd in 2013 and 429tpd was collected daily. During the same period, Petchaburi was ranked no. 5 highest waste reserve in Thailand with 1.2 million tons.

In The Government Roadmap announced in December 2014, WPP landfill has been selected as the waste management center for Phetchaburi, Cluster# 2, accounting for 72.3% of total waste in the province. WPP landfill is surrounded by mountains, having one open ended entrance. The location is the most suitable for WTE PP, as it is isolated from the community. 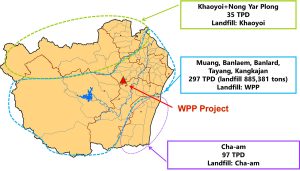